The “Gold Standard” when it comes to managing diabetes involves diet, weight loss, and exercise. Now when talking about exercise, most of us know that jogging is one of the most effective ways to lose weight and to be physically active at the same time. But in a recent study, scientists have found out that brisk walking is a more effective exercise for diabetics than jogging.

Learn more about the details of this as we will tackle this in today’s entry entitled “Jogging or walking: which is a more effective exercise for diabetics?”

What Does Recent Study Suggest?

In a study conducted by Duke University, participants with diabetes (people with elevated blood sugar levels, but not as high as diabetics) were divided into 2 groups. 1 group was asked to engage in brisk walking for 13.8 miles a week while the other group was asked to job the same distance weekly for the next 6 months.

The results were gathered after the experiment, and it showed that those who did the brisk walking exercise developed glucose tolerance 6 times more than those who engaged in jogging. This suggests that walking can be a more effective exercise for diabetics as compared to running.

Even so, researchers have also said that more studies are needed to establish the beneficial effects of walking to diabetes than jogging.

What Are The Possible Reasons For Having This Result? 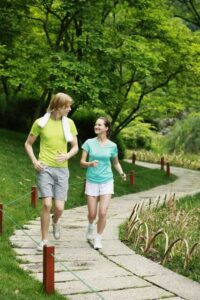 The authors of the study have some theories.

One possible reason is that when your body is subjected to moderate exercises, like walking for 3 miles, your fatty acids are converted into fuel for energy. And it’s a process that doesn’t usually happen when you perform vigorous exercises like jogging.

Still, further studies have to be performed to determine if the effects of walking to non-diabetics will be as effective to people suffering from pre-diabetes and diabetes.

Another reason for the findings is that walking boosts insulin and enables your cells to use glucose more efficiently and reduce blood sugar.

Moreover, walking has also been known to improve pancreatic functions, which is the major factor in regulating your body’s blood glucose levels.

But Do Not Swear Off Jogging Just Yet

While the study has proven the efficiency of brisk walking as the more ideal exercise for diabetics, we still can discount the benefits of jogging. And the reason for this is that intense exercise training such as jogging is also essential for having a healthy heart. Likewise, it is also necessary for maintaining joint and muscle mobility and improving bodily functions.

In the end, combining these 2 exercises will still produce the best benefits in fighting diabetes.